In some cases we are our own worst enemies. We create the seed by improper cleaning when we leave residual amounts of a cleaner which should have been removed through final rinsing. In some unavoidable cases, the metallurgist has selected an alloy for certain required performance criteria, but that combination has created the possibility of "galvanic" action occurring. For galvanic action to occur, 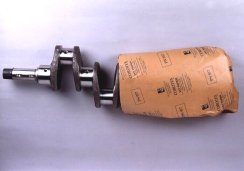 we need two dissimilar materials and a source of electrolyte such as salty water. Galvanic action creates an electrical current causing a change in the state of the iron and as a result, rust is formed.

Have you seen a chrome-plate metal flaking and wondered why ? It is because rust is a polymer, the chain of rust will grow under a layer of plating until plating eventually comes loose. This is attributed to a "seed" or a single flawed area in a plated metal. This is why one must carefully watch for small flaws. The best preventive measure is to make absolutely sure that the product if fully cleaned. Careful measures should be taken to assure the cleaner is completely rinsed off.